It’s been a month of ups and downs. While I was finishing up the colored insert pics for volume #2 of Atlantis: TVC, the side of my laptop cover cracked! I was just sitting there, coloring, when without warning I hear this snapping crunch sound, and my screen falls to the side! When I looked at it I realized that the screen had been attached to the cover only by a tiny plastic peg, and the stress of bearing the weight of the open screen over six years of frequent use had finally snapped it. Terrible design flaw. There was even a spot for it to have a screw, and it did not!

Fortunately, I am a big nerd and I have all kinds of spare computer bits lying around. [I used to have more, but culled my “collection” when we packed up and put everything we owned into storage this past summer.] So I found appropriate-sized screws, and managed to kludge it back together long enough to finish the book.

The laptop still works, but I don’t want to break it completely. Repairing it would be costly and not worth it for the model it is. It would be more prudent to get a new laptop, but that isn’t an expense we can swing right now, it being the holidays and all. So knowing it has a number of uses left before the stress kills it entirely, I moved all my files off of it and onto my backup drive. I figured I would just not use it during my hiatus, but that’s not something that can be my reality–I wanted to draw, to write, to read articles–and doing that on my phone for the foreseeable future just wouldn’t cut it.

After we returned from dinner at the in-laws on Thanksgiving, I made a decision to pull my desktop computer out of the closet. It was all nicely packed away, but it hadn’t been on since March or April of this past year. Since we are in a small apartment, there really isn’t anywhere for a second desk to go, so I hadn’t even remotely thought about setting it up. But now, I was going to try to set a monitor and keyboard on my laptop table. Couldn’t be too difficult, right? Right…?

Well, turns out my monitor is buried in the far recesses of the closet and inaccessible without pulling everything out, which would take several hours. However, the giant second monitor my husband used when he had a dual monitor set up was sitting right there, within easy reach…

So I unpack my computer tower, and my husband goes, “Hey, I think there is something loose in there.” Turns out there was something loose in there–my heatsink had fallen completely off! After the storage unit was hit by the tornado, the climate control was out for two weeks. I’m guessing that this happened around that time, because otherwise everything was stored in temperature controlled environments. Of course, this is close to midnight on Thanksgiving, we have zero thermal paste in the house, and tomorrow is Black Friday! 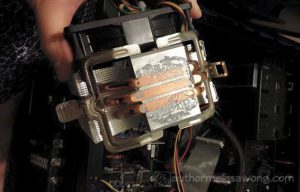 I fortunately remembered that Amazon does same day home delivery in our area via their Prime Now service, so I scheduled a delivery of thermal paste. Hooray for not having to go out into the melee that is Black Friday! Long story short, I reinstalled the heatsink and everything is running smoothly now. I still can’t get over this giant monitor though. My very first TV was smaller than this! I’ve always wanted to draw on a giant monitor, but I’ve never had a chance to do so until yesterday. Best. Experience. Ever. Look at this screenshot of the space I have. It’s a thing of beauty! [When I was working on my laptop, I couldn’t get either Achine or Gia’s face to fit fully on the screen at actual pixels–it would have made my life way easier if I had been able to! But look; I can get both in the same frame now!]

Now that everything is up and running again, it’s time to clean out my programs, delete the junk, defragment, and reacquaint myself with some old games. [Not that I haven’t been playing Sim City 4 or anything…]