I’ve given myself writer’s block.

Well, maybe not an actual block. More of a… writer’s insecurity?

I’m already working on volume #2 of Atlantis: TVC, but all the research I did for editing volume #1 has done something to my brain. Everything I write looks wrong. I seriously re-wrote the same scene eight times, and deleted a whole scene outright–only to regret the decision and revert the chapter to get it back. I seem to be tripping over the same thing, and I can’t figure out why. I’ve never second guessed myself like this, and I can’t tell if it’s a good thing or not. All I know is that it is annoying. [I also haven’t been getting much sleep lately on account of having bronchitis, so there’s that. Yeah, that’s it. I’ll blame that.]

Instead of continuing to beat my head against this wall, I decided to beat it against a different one and practice using a tablet. I have always drawn on the computer with a mouse, and there has always been a disconnect between myself and tablets, no matter how hard I’ve tried to use one. But now I have one, and I’ve made it a personal goal to fiddle with it every so often in the hopes that through sheer force of will, I’ll someday be able to use it. Because I can’t leave well enough alone–even when I give up–I decided to draw the characters from the scene I couldn’t write.

It’s getting a bit easier, but I keep wanting to turn the damn thing like you would a real piece of paper, and half of my errors are from subconsciously tilting it about ten degrees.

The funny thing is that I have a Galaxy Note 3, and I can use the S Pen to draw just fine on it. Here’s a sketch I did last night of birds [and the tail of a species of Atlantian bird] based off my brother-in-law’s pet bird. 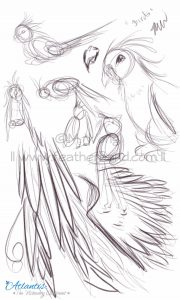 I don’t know what makes them so different for me. In a way, it feels like volume #1 was the S Pen, and volume #2 is now the tablet. I really want to work on #2, but I wonder if I’m simply not far enough removed from the editing process of #1. Maybe it’s the cough syrup clouding my brain. [Which is funny, because things that addle your mind are supposed to make you more creative, right?]

I’ve also been putting off working on the e-book conversion of volume #1, so maybe this ‘block’ isn’t even a block at all, and is guilt from me knowing there is something that I am leaving undone. I’ve been avoiding it for the past week because everyone has been sick with the plague, but now that we’re all feeling better [or in my case, not outright dying] I know there is no excuse and I’m stalling in the face of tediousness.

Of course, there is also the fact that I’m releasing some of the chapters here [leaning towards all of them, eventually. Trying to decide on a schedule…] so I know I have some extra time I didn’t have before that decision.

I work best putting things off until the last minute. Isn’t that ridiculous?