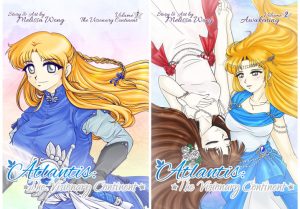 This is an excerpt from volume #2 of Atlantis: The Visionary Continent — Awakening

Please be aware that this is a sample from a late draft, and may not be the exact text available in the final book. Volume #2 is due out in Late Fall/Early Winter. [Exact release date still pending.]

Everything she did was suspicious.

Her knowledge, her actions—even the way she kept denying that she was a friend of Achine—it was all suspect.
She was one of the few people who knew her true identity. She had shown up just in time to stop the assassination attempt on the Royal Mage and Commander Li at Davidian’s funeral, conveniently revealing the cloaked archers and allowing the Honor Guard to dispatch them. She then somehow weaseled her way into being—what did she say—Achine’s magic tutor? That made no sense. Wouldn’t a member of the Honor Guard be superior to some mercenary sorceress who wandered in from off the road? How in the eight continents did she manage to get so close to her so quickly?

He stared at her back as they rode. His side ached, but he remained lost in thought.

She had a ego the size of both Eastal Coasts, yet she didn’t seem like a narcissist. She had come to him to make things easier on Achine when she was unable to speak or comprehend Atlantian. She was here now, spearheading the search to find her. But if she cared for her, what would be the gain in hiding it?

If he thought about it for too long, his own motivations were suspect as well. His volunteering to travel with Eruni was partially out of suspicion of the sorceress, and partially out of duty; but there was another reason, one he didn’t even like to admit to in the privacy of his own mind. He wanted to save her from both the kidnappers, and herself.

In the few months that he had known her, she had unknowingly forced him to confront things about himself that he had hidden away. If she continued pushing people away like she did, she would end up like he had. He had been able to suffer the distance between himself and others, but that was before she had arrived. Now, despite how much they pushed against each other, he felt like she had become a friend, even though he realized yesterday that it was one-sided.

He shook his head, his helm shifting slightly with the movement. Yesterday. Was it really only the morning before that they had that discussion? It seemed so far away now, as if it had happened several months ago.
The ears of his mount jerked sharply to the right, and it raised its head with a snort. Varanis guided it to the left and pulled up alongside the sorceress.

“I know. I felt it a little while back.”

“I was hoping it would leave us alone,” she sighed.

“What exactly is it, then?”

He was silent inside his helmet, thanking the gods for the mask it lent him; otherwise she might have actually seen his face contort in frustration, and he didn’t want to give her that pleasure.

She cocked her head to the right and leaned slightly in the same direction. Her horse objected and started to pull left, away from the unknown threat.

“Stop that,” she chided the mare, guiding it back toward the right. It lowered its head and snorted, same as his horse had done earlier.

“Its frightened; you need to be more confident or it will bolt!” he whispered harshly.

“You don’t think I’m trying to do that?”

He could hear something moving to the right of them. It sounded at least human-sized—possibly several people moving at once—traveling slowly, but steadily; keeping in line with their movements.

They had to be roughly two hours south of Eenabu by now, and deep in the eastern Cresentia Highlands, one of the eight territories that the continent was divided into. The area they were in was a plain, awash in tall grasses with the occasional hill, or small scrubby trees.

There were a few large boulders about fifteen yards to the right of the path they were on, and about fifty feet ahead of them. It would be the perfect spot for an ambush.

“If it’s bandits,” he whispered, “those rocks would be great cover.”

She turned her head sharply towards him, her brow furrowed.

“This is most certainly not bandits. I don’t know what this is, except that it is giving off a large amount of Aethric—no, Calcitic Mana,” she breathed, her eyes wide.

“I wouldn’t joke about this,” she warned, gripping the reins tight, “This might not be a problem you can solve with a sword.”

“Well, it’s a good thing I brought an axe, then, isn’t it?” he said, sliding the weapon off the back of his saddle.

There was a loud, grunting snort of a growl, and they both looked up at the boulders.

“It sounds angry,” he said.

“Since you’re wearing the armor, I think you should go on ahead, and lure it out,” she told him slapping him on the shoulder. One of the thick silver bracelets she wore on her wrists hit his shoulderguard, the metallic sound ringing out across the dark valley. A challenging roar erupted from the vicinity of the stones, and a dark streak exploded onto the path ahead of them, its giant paws skidding in the dirt before it.

Varanis’ head snapped forward, and he kept a tight grip on his warhorse with his knees as he tore the cloth wrapping from the head of his axe. The creature was revealed in the light of the nearly full moon—a burly, hulking beast with wide, rounded ears, a tapering muzzle, and a long, bushy tail that curled over its hindquarters.

They were nocturnal creatures, but usually shied away from humans. On all fours it was nearly as tall as his horse, and its normally golden eyes were glowing a strange blue-white color. The dark fur on its body was broken up by what looked like luminescent channels of light that wrapped around it.

The sorceress’ mare was very close to spooking, and he drew his own closer to calm hers down.

“This isn’t a normal feldival, right?” he asked her, resting the haft of the large, single-bladed axe across his shoulder. She nodded.

“Absolutely not. Someone has infused it, and it’s gone mad,” Eruni growled.

“Can we… do anything about it?”

It stood up on its back legs, standing a full ten feet high. It let out a slavering roar, foam spraying from its jowls.

“Other than kill it?” she replied, looking at him askance, “No.”

Atlantis: The Visionary Continent — Volume #2 will be available exclusively on Amazon in Late Fall/Early Winter. Thank you for your support!