There is something amazing about seeing your finished work in a finalized format.

I have spent the past few weeks fine tuning my manuscript and getting it encoded into e-book format. It would have been done faster, but there was a week or so where everyone in the house came down with the creeping crud–I got lucky and mine turned into full blown Bronchitis! I win!

After quite a bit of trial and error, I now have what looks like my final edition. 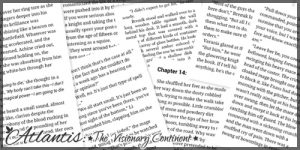 I can definitely, without a doubt, tell you that writing is the easiest part. With what I’ve learned, I shouldn’t have to work very hard on the next books in the series as far as conversion goes, but to use an old colloquialism– the first step is a doozy! I’m pretty sure part of why I had to work harder to find information is because I use OpenOffice [it’s free, open source, and awesome! Also free!] as my word processing program, and you wouldn’t believe how many tutorials and walkthroughs just assume you have Microsoft Word. [So they either think I am upper middle class, or say “Yearrr” a lot.]

It’s all worth it in the end. Seeing my book there in my app, next to the other books in my library was quite a thrill, even if it’s not live and I just popped it in there to check it, it was quite a rush. This is how people will see my book. I was speechless.

Then my daughter grabbed my tablet pen and dunked it in my mug of chocolate milk.

I had to redraw parts of the cover earlier because I suddenly discovered that the site that said to not make images larger than ___ size was horribly wrong, and that images should be at least double what I had the cover at. Awesome. I love doing the same thing over again.

Anyway, that’s why the pen and the milk were sitting next to me. I set the pen down to stand up, and in that split second my daughter thought it would work better if it had some chocolate milk. [Spoiler alert… it didn’t.] Fortunately I rinsed it off right away and it was fine, but I had a serious “Oh shit!” moment. All I could think of was that these stupid pens cost almost half as much as the damn tablets.

Part of me wonders if I should compile what I’ve learned and make a guide out of it. It could take a while, but if it can help someone out, then it will be worth it!

I mean, I can’t be the only person who uses OpenOffice… right?